We are currently closed for all non-emergency services due to the COVID-19 issue, and anticipating opening on April 7th, so long as Iowa Dental Board recommendations have not changed. Learn More

WE'RE ALL ABOUT BONDING 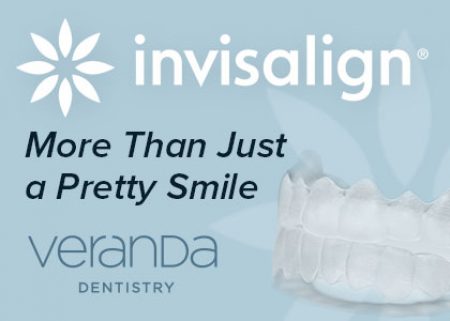 At Veranda Dentistry, we want all of our patients to have the healthiest, most beautiful smiles possible. That’s why we love being able to straighten teeth quickly and discreetly with Invisalign! Many folks think Invisalign is purely a cosmetic treatment, but what you may not know is it can also help minimize bone loss and […]

At Veranda Dentistry, we’ve always been about taking great care of our patients in a family-friendly environment. To help us continue this mission and be able to provide even better care for even more Pleasant Hill families, Dr. Chad Johnson has welcomed an associate doctor—Dr. Emily Flesner—to join our team. Dr. Emily Flesner was born […]

By Chad Johnson, DDS, FAGD By all means, don’t floss. You’ll be joining millions who don’t. We’re told that 93% of the population doesn’t floss, so you’ll be in good company. The recent Associated Press article (see link at end of article) claims that the federal government requires that dietary guidelines, such as flossing—which has […]

A year ago, we celebrated our 10th Anniversary with a BBQ Open House (July 2015). Toni was one of two $10,000 recipients of free treatment, and she got her smile back. Here’s her story. She was not present when she won, as she was nominated by her sister as a surprise.

Congratulations to Deena Dyer for winning the Free Invisalign Offer! This is in celebration of Oral Health Clinic’s 10th Anniversary. She was announced as the winner at our BBQ celebration on July 11, 2015. Watch the YouTube video of the announcement:

Email This to a Friend